I woke up this morning craving doughnuts. But since we moved, it’s about a 20 minute drive to the closest doughnut shop. Yes, I live in the absolute middle of no where. No doughnut shop!

So I got online and googled “doughnut recipe.” I then saw The Kitchen Magpie’s post for Mini Doughnut Waffles and my mouth started to water. How could I pass up a combination of two of my favorite breakfast foods? I just couldn’t. And because I had (nearly) all the ingredients called for in the recipe, I rolled out of bed, pulled out the stuff, and had at it in my kitchen.

I replaced the white sugar for brown sugar. And then I noted down on my shopping list I need more white sugar.

I was also hoping I’d be able to find a roundup to submit my version of these doughnut waffles to. Bealleau Kitchen used to be the host of Random Recipes, which I participated in all the time. After many months of successful roundups, Dom retired the roundup. He started a new one though, Simply Eggcellent. I’ve been meaning to join along, but my blogging had tapered off. So this is my first submission to his new roundup! July’s Simply Eggcellent focused on breakfasts. Though I had something else planned to submit, who knows if I’ll actually get around to making it.

What’s exciting about eggs in the kitchen, is they get hidden in so many different foods. You can scramble them, fry them, or do something where they’re obvious, or they can be the binding element in your batter! 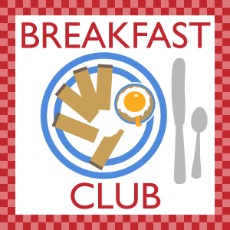 Also, I learned about this other roundup called Breakfast Club. Breakfast Club is hosted by Made With Pink and Maison Cupcake. These yummy waffle/doughnuts will be shared there too!

I made far too many for the two of this morning, so the rest will be frozen so Matt can throw them in the oven to warm up while I’m out of town.

1. In a large bowl mix together the sugar, baking powder, salt, and pumpkin spice. Add the eggs, melted butter, and milk and stir to the sugar mixture.

2. Slowly stir in the flour. Mix the flour into the sugar mixture with a wooden spoon, until there are no dry spots of flour left.

3. Warm up your waffle maker and spray with cooking spray.

4. Once warm, place the batter in the middle of each waffle space. The dough will be sticky and thick. It will not spread out like a traditional waffle. My batter was spooned into the waffle maker in portions of about one heaping tablespoon each.

5. Cook for about 3 minutes, or per your waffle maker’s instructions, until the waffles are golden brown.

7. Stir together the sugar and cinnamon for the topping. Dip each waffle in the melted butter and then the sugar-cinnamon mix. Let set for about 5 minutes.

I never knew until the morning I made these waffles that my boyfriend hates walnuts. What the? How have I been with this man for 2 years and not know something like this? Additionally, HOW CAN SOMEONE NOT LIKE WALNUTS? I think we either need to breakup or have an intervention – maybe both.

Well, or I can just get double the walnuts in everything from now on. That’s pretty much what I do with avocado since he’s allergic to it. Every possible opportunity I can to eat avocado I’ll eat it since I can’t do much with it at home.

In other news, I loved these waffles walnuts and all.

3. In a medium bowl whisk together eggs, vanilla, buttermilk, bananas, and walnuts. Add the wet ingredients to the dry ingredients. Stir until incorporated.

4. Cook according to your waffle iron instructions.

Part of my weekend breakfasts this week included waffles. For as much as I like to cook, I’m going to admit I have never made a waffle before these blueberry waffles. Matt gave me this old waffle maker last year that he found when moving. It has sat in my kitchen supply cabinet since then. It actually even survived a move from my apartment to this house.  But I’ve still left it sitting in the kitchen supply cabinet, along with the equipment I actually use on a normal basis (my rice cooker, slow cooker, blender, etc.)

I had a bunch of leftover blueberries this week, so I was trying to use them all so I wouldn’t have to throw them away. Unfortunately I think I used way too many blueberries in this recipe and probably should have cut it in half. I used 1 cup of berries, which was clearly too many and caused some burning on part of the blueberries in the waffle maker. Whoops! This was definitely a learning experience, that’s for sure.

There were two things I learned from this experience:
Lesson One: Don’t put too many berries in your waffle mix.
Lesson Two: Make lots of waffles!

3. Fold the blueberries into the waffle batter.

* makes 4 waffles
* 229 calories per waffle
* This waffle recipe is being shared with What Makes You Say Mmmmm? Monday Linky.