Um…. Hello? Hello out there? Can anyone hear me? I have fallen off the world of blogging for nearly two months. I’m not sure what happened except life just kept going. I’ve been working nonstop, because I still have 11 days left until I’m off of my probationary period at work and can actually take time off. I’m taking time off this month to travel to Ohio to see family.

In the last two months I’ve been in trial about every other week, got new privileges at work (which don’t really equate to a promotion, because that’s not how it works – but I can now handle more serious cases,) and I moved into a new house. I’m still renting and I’ve downsized significantly. I was paying nearly $1200 a month for the house I was in, which realistically isn’t that much money for the size of house we were in, but I was just spending more than necessary. I mean, we didn’t really need a house that big for the two of us and our cat. So we are saving $300 a month now, but my kitchen is significantly tinier. I’m trying to come up with ways to maximize the storage, because there isn’t much shelving. We already bought something to use as a pantry for the food, but oh my god, I have so much kitchen stuff. There were more boxes of kitchen stuff that we moved than anything. Is that embarrassing?

We officially moved on the 20th, but then we had to clean out the old place and I got busy at work . . . and we hadn’t gone grocery shopping. We finally went today, so I decided to take this as a new start.

I will also try to lose weight again.

Today’s food won’t help with the weight loss . . . but at least I’m posting in my blog?

One of my favorite challenges continued in my absence (because apparently the world continues even when I don’t!,) and this month I decided I would play again. Given chocolate is my downfall in life, I decided it would be the most likely challenge for me to actually do. So I used the oven in my house for the first time today and found a recipe that combined blueberries and chocolate for We Should Cocoa. This banana bread is so moist and filled with such yummies. My boyfriend took a bite and exclaimed, “This is the best banana bread I’ve ever had!” So there it is. I’m back and I have banana bread.

I had to make a few variations from the original recipe, because I thought I had sugar? But I don’t? Or it’s still packed? I don’t know. I made it work with powdered sugar and it came out just fine.

2. Cream the butter and sugar together until fluffy. Add the eggs one at a time, fully mixing them into the butter.

3. Add the banana and chocolate and mix with the butter.

4. Sift the dry ingredients together and mix them with the wet mixture until just combined. Stir in the blueberries, making sure not to break them.

5. Spread the batter into the loaf tin and bake for 60 minutes. Remove from the oven and let stand for 20 minutes before slicing.

* makes 1 loaf
* besides We Should Cocoa, this dish is also being shared with Small Victories Sunday

I essentially ate dessert for breakfast the last few days. My only response to your judging is, “why shouldn’t I?” And seriously, why shouldn’t you? What’s stopping you from having your dessert first thing in the morning?

This loaf is such a combination of yummy flavors. I wasn’t sure how it would come together, but I liked it a lot. I hope I like the blueberry bacon breakfast cake as much that I’m making tomorrow.

I told you there were a lot of blueberries at the market.

2. In a mixing bowl, mix together the flour, baking powder, coffee, and salt.

3. In the bowl of a stand mixer, cream the butter until it’s soft. Add the honey and sugar to the butter, a little at a time, making sure to cream together. Add the eggs one at a time. Add half of the dry mixture, keeping the beater beating the batter. Add 1/4 cup of the milk. Add the remaining dry ingredients, followed by the other 1/4 cup of the milk. Make sure everything is combined and that there are no dry spots.

4. Using a wooden spoon, fold the blueberries and chocolate chips into the batter.

5. Pour into your loaf pan. Bake for 45 minutes, or until a toothpick stuck in the middle comes out clean. Let cool for 10 minutes before removing from the loaf pan.

This month upon surfing the waves of food blogs, I found a new monthly round-up that I decided to participate in. This new round-up is called Feel Good Food and it’s hosted by A Kick At The Pantry Door. Each month there will be a theme, where bloggers are challenged to make a healthy recipe holding to the theme that doesn’t lose the delicious tastes we all crave and love. This month’s theme was blueberries, which is more than perfect given the vast abundance of them right now at the farmer’s market.

I have blueberries coming out of my ears. Between the parfaits, pancakes, and a mocha-honey blueberry loaf, I still have a ton.

It’s great I’m entering this round-up so I can get some other ideas on how to use these blueberries from the other great recipes!

1. Spoon 1 tbsp of blueberries on the bottom of two glasses. Spoon 1/4 cup of yogurt over the top of the blueberries. Top with 1 tbsp chocolate chips and then 1 tbsp granola. Repeat the layers. 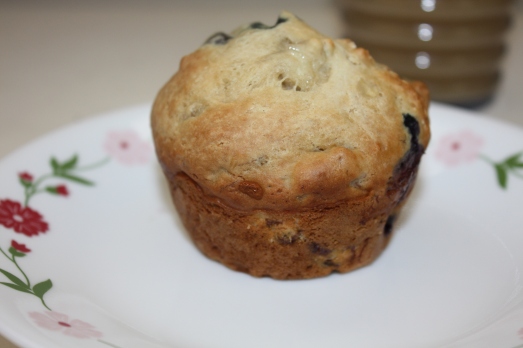 I’m getting into this big breakfast thing. I have a routine on bar prep class days. I wake up at 5:30. I exercise. I shower. I make a  nice breakfast. I go to class and have a snack. I have a healthy lunch. And then I study study study until it’s time for a yummy dinner.

I’ve been having all types of breakfasts: waffles, omelets, pancakes, breakfast sandwiches, and now muffins.

My friend Andy was staying with me for a night and she told me that she had told one of her other friends that I was a “boss.” She went on to say, who studies for the bar and has time to make muffins in the morning before class? Well, one answer. I do. I do best with my schedules that keep me going going going. With all this study study study I have to go go go pretty much constantly.

2. Place the flour, baking soda, salt, and blueberries together in a bowl. Mix together. In another bowl combine the honey, sugar, banana, yogurt, egg, and milk. Whisk together. Pour the wet ingredients into the dry and mix together, making sure to get rid of any dry spots.

3. Spoon the batter between the 15 cups, diving equally. Bake for 20 minutes or until a toothpick stuck in the middle comes out clean.

Part of my weekend breakfasts this week included waffles. For as much as I like to cook, I’m going to admit I have never made a waffle before these blueberry waffles. Matt gave me this old waffle maker last year that he found when moving. It has sat in my kitchen supply cabinet since then. It actually even survived a move from my apartment to this house.  But I’ve still left it sitting in the kitchen supply cabinet, along with the equipment I actually use on a normal basis (my rice cooker, slow cooker, blender, etc.)

I had a bunch of leftover blueberries this week, so I was trying to use them all so I wouldn’t have to throw them away. Unfortunately I think I used way too many blueberries in this recipe and probably should have cut it in half. I used 1 cup of berries, which was clearly too many and caused some burning on part of the blueberries in the waffle maker. Whoops! This was definitely a learning experience, that’s for sure.

There were two things I learned from this experience:
Lesson One: Don’t put too many berries in your waffle mix.
Lesson Two: Make lots of waffles!

3. Fold the blueberries into the waffle batter.

* makes 4 waffles
* 229 calories per waffle
* This waffle recipe is being shared with What Makes You Say Mmmmm? Monday Linky.

I don’t make breakfasts enough. Usually I’m in such a hurry at breakfast time that I just rush out the front door. If I have a little bit of time

I’ll blend together some fruit, yogurt, and juice in the blender and call it a smoothie. Today however I took the day off of work because I’ve been sick all week and am still feeling the effects of it. My stomach however is finally in the condition to eat solids, so I decided that I would make pancakes this morning.

When I make breakfast, I remember how much I love making it. I’m not a bacon and eggs type of girl. I love sweet foods for breakfast. These pancakes were very sweet.

The only thing I didn’t like about them was that they really stuck to the skillet I was using. This is partially the fault of myself, since I own very cheap pots and pans. This can be credited to the fact that I’m a poor law student and don’t have a ton of money to be throwing around. But that does remind me my mom told me she had a cast iron skillet I could have. I need to remember to grab that next time I head home. But these pancakes do stick more than the usual pancakes I make.

I’m making a vow (that I might not keep) to make breakfasts like this on days where I’m not going to class or work. So hopefully you’ll be seeing more breakfast foods in the future!

1. In a medium bowl sift together the dry ingredients. In a small bowl combine the milk and vanilla extract. Pour the wet mixture into the dry mixture and stir, until well combined and no dry spots are left.

2. Mix in the mashed bananas and olive oil.

3. In a heavy skillet, heat either butter or olive oil. Once hot, drop the batter into the skillet into 2 tbsp size servings. Once the pancakes start bubbling on the raw side, flip. Cook until golden brown on both sides.

1. In a small pot combine the berries, 1 tbsp of water, orange juice, and sugar. Mix well and bring to a boil.

2. Once boiling, in a small bowl combine the cornstarch and other 1 tbsp of water. Pour into the blueberry mixture. Lower the heat and simmer, stirring frequently until the sauce becomes thick.

3. Take off heat and stir in the almond extract and the ground cinnamon.

* makes 6 pancakes
* 317 calories per pancake and sauce
* These pancakes are going to be shared with Friday Potluck at EKat’s Kitchen.