I’m the worst blogger ever. Life has kept me busy. Work has kept me busy. I would say I promise to be better, but that might just end being another lie. I don’t mean to be a liar . . . But it probably wouldn’t be the truth.

But I did participate in this month Food ‘n Flix! Are you proud of me? 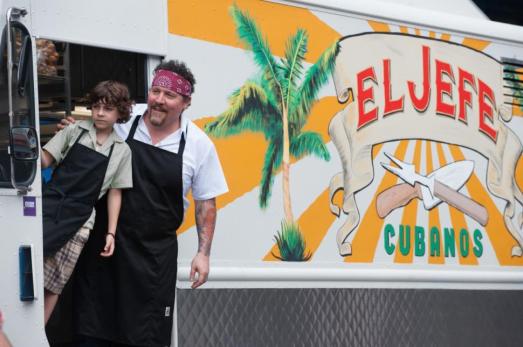 This month’s movie, Chef, was hosted by Culinary Adventures by Camilla. I had been intending to watch this movie for some time, but it took Food ‘n Flix to kick me in gear.

Chef is a movie for any foodie. A chef, Carl Casper, loses his job and tries to put his stuff back together – to find his drive. And what does he do? He opens a food truck, featuring Cuban Sandwiches!

There was a ton of choices in this movie. My list includes andouille sausage sandwiches, french onion soup, noodles of some sort, try to make something relating to Twitter, breakfast . . . There were a ton of choices.

The sandwich was delicious. I have so much pork now though, I’ll be eating pork for a week.

And this wasn’t the greatest picture . . . but I tried. I at least tried.

3. Place in the skillet in the melted butter. Toast until golden brown on both sides of the bread.

1. Combine all the ingredients except the pork. Place the pork in the marinade and let marinate overnight.