Sundays have unofficially become “hot chocolate day.” As long as it stays cold outside, I’ll be beginning the new week with a mug of hot chocolate. It’ll be the one thing that makes me sad when it becomes hot out again – I’ll need to think of other ways to bring a sweet start to my week: milkshakes, smoothies, slushies. 😛

Let’s see how long I keep this up!

I love winter time almost exclusively for hot chocolate. Every mug of hot chocolate when it’s cold outside feel so justified. Living here in the desert, it didn’t get cold until rather recently. Usually I’m drinking hot chocolate much before Christmas. But with the warm weather outside, I didn’t even want hot chocolate! How awful! All I wanted to drink was water!

Alas, the cold weather has come and done some havoc on the house like freezing my pipes. Before we talk any more about hot chocolate, I have to tell you that this winter hates me. First my pipes froze (and luckily thawed without bursting) and THEN my power went out and left me without any heat! The power going out wasn’t actually weather related and was just old wiring related, but having these back to back disasters when it’s cold out isn’t fun!

What is fun is cuddling up with a good book and a cup of hot chocolate. 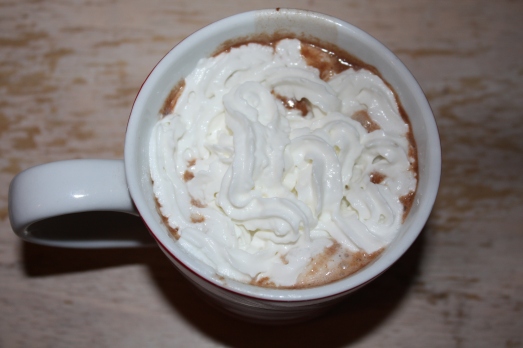 What else should I do with the orange peel? It’s really finely grated and tastes delicious.

This month’s We Should Cocoa is all about simplicity. Lisa at Lovely Appetite is hosting this month. This might be the simplest chocolate recipe of all!

My parents love blood oranges. In California blood oranges are in season from November to May, so it’s still prime time to get them at the market. Every Sunday morning my dad heads to the farmer’s market and stocks up on produce for their household (I do the same, but I don’t buy as much fruit as he does.) On Easter Sunday he got some blood oranges that we used for this wonderful cocktail.

So the reason I actually found this recipe to begin with was because I watched Practical Magic for this month’s Food ‘n Flix. Practical Magic is the story of Sally and Gillian, who are witches. And on top of this, they are cursed. What could be worse than being a cursed witch that everyone snubs? I’m not sure. It sounds pretty awful.

One night, Sally, Gillian, and their aunts indulge on margaritas. While their cocktails were more traditional, I was so intrigued by the red of the oranges in this recipe. It seems bewitching, it seems magical, and it seemed to fit the feel of the movie well . . . The Owens sisters were different. This margarita is different.

I’m not going to take claim where it’s not due though. I didn’t make this recipe up for one, it comes from smitten kitchen. And secondly… My brother actually ended up mixing the drink. I was going to, but I was busy frying up crab cakes which we had with our Easter dinner. So thanks Ben! You can be a witch too!

Ingredients
1/2 cup blood orange juice
3 tbsp lime juice
3 tbsp triple sec
7 tbsp tequila (we used the cheap stuff, you can be as classy or not as you like)

1. Mix together. Pour in glasses over ice.

My hot chocolate obsession lately has involved a lot of Ovaltine. I also got this hot chocolate mix from Cost Plus World Market. It’s a red velvet hot chocolate and is wonderful. But for as good as my heat up some water, add some powder, and mix hot chocolates have been, I decided it was time to put the powder aside for the night, watch National Lampoon’s Christmas Vacation, and drink some hot chocolate that’s just as easy to make, just yummier.

Now… This is a very simple recipe. I was actually going to make homemade cinnamon marshmallows to go with it. I’d never made marshmallows before and my first attempt was a failure. However, this first attempt also used my light corn syrup. So my marshmallow plan temporarily went out the window. I’ll have to try again another time.

I did put some canned whipped cream on the chocolate after I took the picture. It was such a rich hot chocolate. The cinnamon flavor was perfect. It wasn’t overpowering. It was just enough and just perfect.

1. In a pot, whisk together the milk, vanilla, and cinnamon. Bring to a boil over medium heat. Once the milk comes to a boil, take it off the heat.

* makes 2 cups of hot chocolate
* besides We Should Cocoa, I shared this with See Ya in the Gumbo